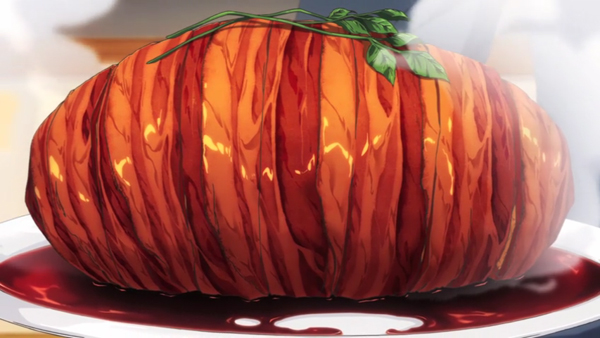 We love anime! We love food! That’s why we made an anime style food truck. At the end of the night, after working hard on the food truck it’s finally time to relax and watch anime… about food. What’s not to love about food? It keeps you alive while also being tasty. How grand. How terribly, terribly grand.

Let’s take a look at some of our favorite cooking anime and manga out there, shall we? We tried to offer a range, so if anime or manga has ever intimidated you before, we’ll help you through this. It’s a manga about bread! And just bread! No, it’s not boring, come back! There’s a lot of types of bread out there!

The story follows Kazuma Azuma on his quest to make a national bread for Japan, one that is as much a staple as rice is. He joins a huge bakery chain, Pantasia, to further his goals and meeting a lot of quirky characters on the way. Despite being just a cheerful kid, he has warm hands, called solar hands, to help him on his quest as well as his own ingenuity.

The story has light dramatic moments, but it’s mostly humorous and gradually becomes almost completely a gag/slapstick story at the end, for better or worse. As he works in a very small bakery, there are plotlines about honing his skills or producing new bread for the store. There are plenty of competition plotlines with the reactions sometimes being the most hilarious of all.

If you love humor and food, this is the anime for you. Also if you love bread, but that’s not required. If you’re into anime at all, you’ve probably heard of this anime by now. If not, we’ll give you a quick breakdown!

The story follows Souma Yukihira, a 15 year old entering a prestigious cooking school where conflicts are solved through food competitions rather than a student jury. There is also Erina Nakiri, said to possess taste buds well above the average person, and Megumi Tadokoro, an initially shy girl trying to keep her head above water while persisting in a very competitive field.

The story mostly focuses on high end dining while occasionally looking at more every day dishes. As the manga/anime goes through restaurant life and stress of being in a professional kitchen, you are introduced to many cuisines, from Japanese to French, Italian to Chinese. The manga also offers recipes for all the dishes, but the ones that involve molecular gastronomy might prove a little difficult for the average home cook. If just reading about all those high-tension and dramatic stories has you stressed, we’ll end with a more light-hearted one. This one is definitely harder to find than the other two, but if you’re ever lucky enough to get the chance, we encourage you to give it a read!

“Cooking Papa” is one of the oldest manga out there, it started in 1985 and is still ongoing, there was also a short run anime based on the manga. The story revolves a little family, a salary man, a wife, who is always busy working in print journalism, and their son. As the wife is constantly busy traveling the world with her career, the husband is the main cook of the house.

Whenever someone tastes a dish he’s made, he lets them believe his wife has made it and tries to hide the fact that he’s an exceptional cook. The manga not only shows off tasty dishes, as well as the importance of good food in our life, but gives you a little insight into family dynamics in Japan back in the 80s.

Every chapter comes with a dish that he shows the readers how to make as well as a recipe to go with it, so if you’re interested in making Japanese dishes at home, give this manga a read! Some recipes are a little harder than others, like making ramen from scratch. They say it’s easy but it takes days! DAYS.

If you’ve enjoyed this post on Okamoto Kitchen recommended cooking anime and manga, let us know! We’ll do another as there’s plenty of food manga and anime out there. And let us know your favorites! We’re always on the hunt for more.