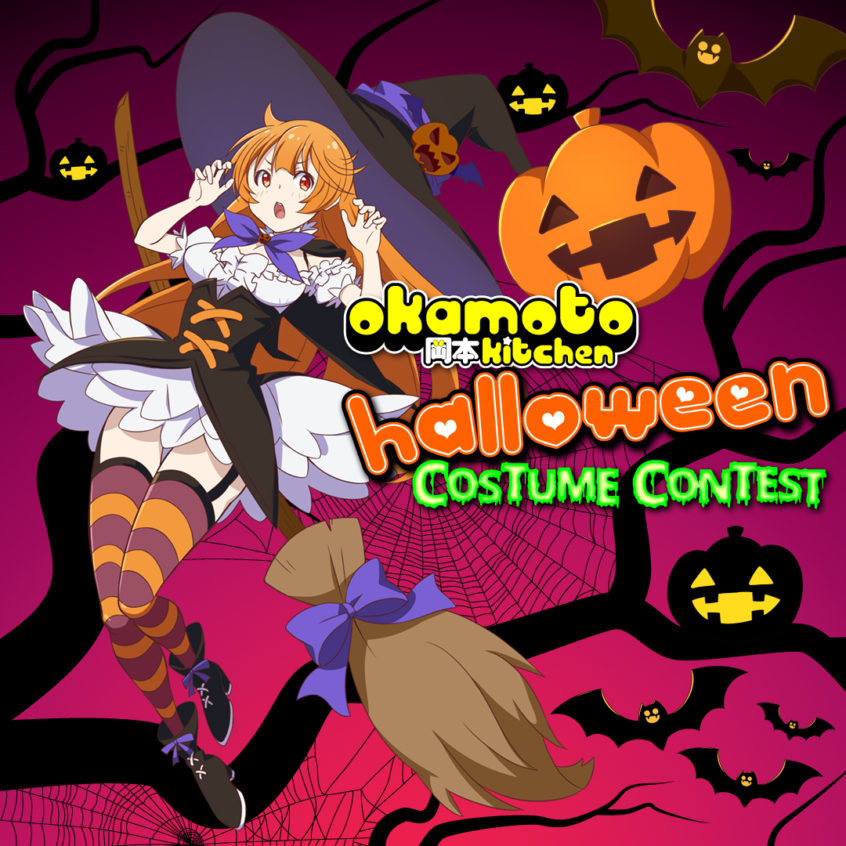 This year we had Okamoto Kitchen’s first ever costume contest! The rules were simple, wear whatever you want! Just send us a picture with you and an Okamoto Kitchen sign! We received so many creative entries and we’re happy to announce our top 3 winners! We hope you had as much fun as we did, and we’re already looking forward to next year’s contest! First up is E.M. Sanchez as Ranma Saotome! For customers new to the world of anime, Ranma is a character from a very famous manga called Ranma 1/2. We love that pose, he really captured the essence of the character and, what can we say, we’re a sucker for old anime.

For winning, E.M. Sanchez will receive a set of Okamoto Kitchen Halloween Stickers, one free 3-hit combo, and 100 leaderboard points! Next year might we suggest female Ranma to save on money? It’s not a bad idea, right? Jordan Gromley as “The Psychic”

And second we have Jordan Gromley as The Psychic! Everyone kept wondering if it was anime but no, it’s just a cool costume with spooky eyes. We love it.

Nicely done, Jordan, for getting second! It’s not the best but it’s not the worst! We’re kidding, second is still really well done. Jordan, for second place you’ll also get a set of Okamoto Kitchen Halloween stickers, TWO free 3-hit combos, and 100 leaderboard points! It wasn’t the third eye that made us give her second… not… at all… So. Blue.

Oh, right. And finally, we come to… Congrat, David, our costume contest winner! We’ve got David Kritzer as a KGB agent Rigging the Election! Wait, if he’s a KGB agent holding up things that he rigs and he’s holding up an Okamoto Kitchen sign is… are we also being controlled by a KGB agent? That guy we handed the secret documents over to… was… really? Uh.

Ahem, ignoring life-changing revelations for a minute, for the ever coveted first place, David will receive a set of Okamoto Kitchen Halloween Stickers, THREE 3-hit combos, 100 leaderboard points, and a unique Okamoto Kitchen Halloween themed shirt just for them! Also since you seem pretty on the up and up about political secrets, David, please put in a good word for us for whoever you work for. Tell them about our nom bomb. Please.

And that concludes Okamoto Kitchen’s first ever Halloween Costume Contest! We would like to thank everyone again for participating, we had so much fun looking at all the costumes and we’re already looking forward to next year! We hope to see everyone again next year!