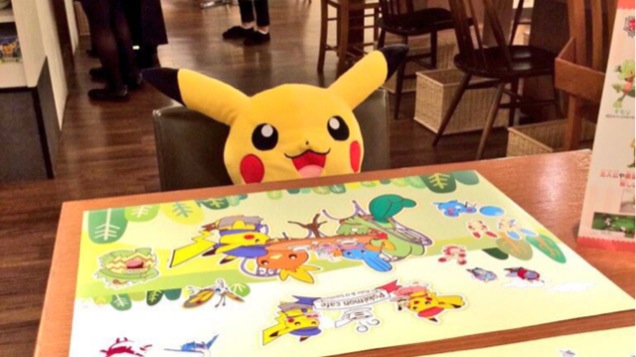 We love celebrating the holidays, which is why we love creating themed food for the holidays! Themed restaurants or cafes are plentiful in Tokyo, ranging from things like trains to anime to animals! Seeing as we’re an anime truck, we’re going to focus more on the anime side of things. Let’s take a look at the different cafes out there! Some anime themed cafes are more permanent fixtures and so they contain far more elaborate decorations. The above picture has the chef character, Sanji, standing in front of food seen in the anime. The name “Baratie” comes from a floating restaurant-ship that Sanji previously worked on. Not only that, the food is also inspired by the anime. This parfait comes with a straw hat pirate flag, the main pirate crew of the manga/anime, as well as made to look like a devil fruit from One Piece.

Apparently they have a pretty cool toilet.

Here’s more examples of menu items but this time from a Gundam themed cafe. Not all the restaurants are permanent fixtures though. For example, some are pop up restaurants that take over a restaurant temporarily with their own decorations and food items. In the case of the picture above, the items are Sailor Moon themed drinks, the bottom left looks like Tuxedo Mask, the main male character. The event went on for a couple months in a bar takeover in order to promote the then up and coming anime, “Sailor Moon Crystal”. Another pop up cafe for Kyoto Animation’s Free! However, not all of them are temporary or permanent. The above picture for Madoka Magica is from Good Smile’s Animate Cafe. Good Smile is a figure company specializing in figures of characters from anime and video games. Their Animate Cafe is a more permanent fixture that changes themes frequently. The left dish features Kyubei, the mascot from the anime. There’s not much to say here that hasn’t already been said in the anime themed section. So we’ll just leave you with cute pictures instead. You know who this is The cafes also sell various goods. In the case above, it’s the store specifically for Capcom Cafe selling goods based on their properties.  The pop up stores also sell exclusive goods only sold in the time frame the store is open.

If anime and video games aren’t your speed, there’s always the AKB48 cafe. Egg is too cute to eat

If Japan is too far out your reach, try our holiday themed parfaits! Not anime themed but they are themed.